The Silent Support Army; A Series About My Life As War Veteran’s Wife.

I recently discovered a phenomenon; well not so much discovered but named one more to the point. Much like the little man in the fridge that turns the light on and off, this is a little man that sits in my stomach and when the moment strikes, hits the ‘sick button’. You may not be familiar with the terminology but you will be familiar with the sensation. The sick button takes a hit when you are confronted with a fear, a little bit of anxiety or perhaps a little excitement. All emotions can happen either in isolation or mixed together resulting an overdose of ‘Blahhh’ (insert puking emoji face here).

By now I am picturing you all with a pursed grin nodding your head? You got me, right? Now, there are many things that ignite these emotions for me but there is only on that strikes my sick button with the force of 1000 giants and that is the thought of moving. I feel as though am being struck with a close coupling of waves of varying ferociousness somewhat likened to being out in a boat in a cyclone (yes, I’ve done that too). The first is a wave of excitement; naturally a move will require the new abode to be decorated accordingly necessitating endless shopping trips; there is no way the old stuff will do. Excitement is followed by the smaller pang of fear at the thought of having to find a new job and establish a new network of friends and that includes attending those functions at the Mess (#therealhousewivesoftheadf). Then you are hit with the monster wave. The one that makes all other emotions pale in comparison…the anxiety of the actual process…THE MOVE!!!!

I am not a seasoned professional like some of my friends

Now, since I am a relative new inductee into the ‘Second Wives Club’ I am not a seasoned professional in relocations like some of my friends however, I have had to endure three moves in the first four years of us being together. One move from North Queensland to Canberra and two more moves locally in Canberra, both twelve months apart. It appears the Australian Capital Territory is the only state or territory in Australia where you can evict your tenants with two weeks notice if you want to move back into your own house. Memo to self, rent a house from landlords with more investment houses than they can poke a stick at, that way you are relatively safe from eviction!! 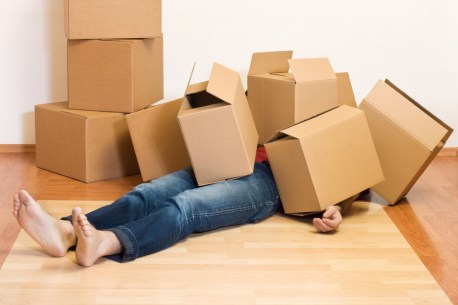 Part of the process, prior to moving, is providing a full inventory of your household to the relocation team to pass on to the removalist company. A date is booked in for the first two stages of removal. Stage one; an army of removalist turn up at the crack of dawn and set about packing your life long possessions into moving boxes. By the end of the day your world is nothing more than a sea of cardboard boxes and plastic bags. The day is capped of with ‘the labelling’. By now I can hear the groans coming from my readers around the world. Yes, the labels!!! The very thought of these labels makes my stomach churn. You see every single item that is going on that truck has to have a label on it. To date I think our records is somewhere in 500’s. Now the protocol is to attach the label to the item in a location that is not readily seen or easily flicked off in the move. Now this wouldn’t be a problem if the removalists actually followed procedure and attached them to the under side of a table or chair but no!!! These things once attached are not comin’ off…EVER!!!!! I still have a side table in my lounge room with a three labels on them and they don’t appear to be coming off anytime soon. Not even with hot soapy water.

Naturally as everything was packed the day before so you will have stayed in a hotel over night and will be at it again early on day two. Day two, and stage two arrives, the day of the ‘uplift’. This is the day that you nervously watch as your life rolls out of your front door on a trolley and is squished, stacked and stuffed into a shipping container you pray to god you will see again with its contents safely in tack. Depending on where you are moving to, how your are getting there and if the house you are moving into is ready to receive it’s new family, the duration of separation from your ‘stuff’ can be anything from a few days to a few weeks. I’m not sure about a few months but I am guessing this would be the case if you were taking up an overseas posting.

Heads up, if that happens, you are never seeing it again!

Then comes the download and install, lets call this stage three and the one that has attributed to all of the nasty vices I have developed in the six years I have been with my love. Now, if I may just offer some advice, even to those of my followers that are not associated with the military, it’s ok to love your stuff, just don’t get too emotionally attached to it ‘cause it doesn’t matter how much paper and packing they are sticking around your world possessions, there is a high probability it’s getting broken or even better still, delivered to another family who will just willingly accept it into their family and love it just as much as you did.

Heads up, if that happens, you are never seeing it again! Moves two and three rated slightly lower on the stress scale for me mainly because by then I had sold my beloved piano, I just couldn’t bare the trauma of watching removalists take it off the truck and carry it upstairs any longer but I can recall the gut twisting moment my grandmothers antique cheval mirror and frame came off the truck in three pieces, not the two that I had put it on the truck in three weeks earlier. Then there was the moment I watch my washing machine roll down the hill to meet me having slipped of the trolley the removalist was trying to wrangle a wild brumby!

My husband has so many funny stories of moves gone wrong. Stories of his friends listed a 22ft long kayak on his inventory and the removalist turned up with a 20 ft container… Did they go back to get a bigger container you ask? Well no they didn’t they just stuffed that thing into the container and shut the door real quick! Or of how you choose your house from the DHA (Defence Housing Australia) menu like you are ordering takeout from the Chinese restaurant down the street. The same house that is still occupied when you turn up to move into it! There are not enough available words in this blog to tell you the experiences we have had. I know I shouldn’t laugh but it is more out of shared experience than laughing at misfortune. Sometimes laughing is all you can do because to think about it any longer you’d just cry. As military WAGS, these are tales that we tell. We wear them like badges of honour as we soldier on and just get it done so that when our boys come home, they come ‘home’.